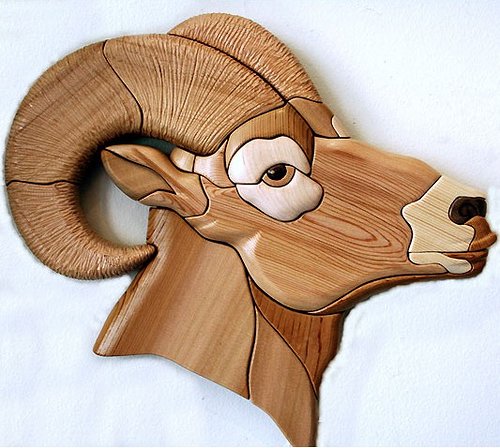 Del Holbrook is a native of British Columbia, Canada having been born in New Westminster and raised in Port Hardy, a logging community on the northern tip of Vancouver Island. His interest in woodworking was sparked during his early teen years when his family built a 17 foot wooden boat. With that start and a keen interest in creativity he dabbled in woodworking until 1988 when his interest was captured by an article in WOOD Magazine about Judy Gale Roberts and Intarsia. He immediately knew that this was the medium for him to express his creativity. His passion was now on fire and the walls in his home soon became covered with intarsia pieces leading him to start selling his works. The rest is history.

Del creates his pieces mainly from the many colours, grains and textures of Western Red Cedar combined with other native British Columbia woods and augmented by small pieces of exotic hardwoods.  These woods are used to create his unique pieces of art that have found their way around the world.  Some of his works now reside in England, Sweden, New Zealand, Japan, Pakistan, the United States and of course Canada.

A variety of Del's work can be found year round in the Blackberry Gift Shop.

You can see more of his work at: